Archive for the ‘Smile Gallery’ Category

Hi everyone, I’ve noticed quite a few changes with my teeth over this past week since wearing the Invisalign aligners and the good news is they no longer feel as tight. In fact the top set are feeling fairly loose now, which is a good sign and means my teeth have moved. It’s only a few days now until I move on to tray two which is pretty exciting!

Yesterday, I went back into the Liverpool Dental Spa practice for a check-up and to get my next few trays. I have four sets now and the idea is you are given a few so you don’t have to keep coming into the practice all the time.

I can’t rave enough about how fantastic their dental practice looks. The stylish décor definitely makes you think you’re at a spa or a beauty parlour rather than at a dentist. The tropical fish tank and clean open space of the waiting area make it look really peaceful and put your mind at rest.

Take a look for yourself: http://pinterest.com/liverpooldental/welcome-to-our-practice/

I was given a thorough check up by Marius who noticed that I have some swelling around the bottom set and he asked me if I had any experience of bleeding gums. I mentioned that I had noticed some bleeding when I had brushed my teeth, but it didn’t seem like anything major. I was given some special toothpaste, mouthwash and gel to help treat the areas, which hopefully will help.

You have to be quite careful when cleaning with braces and Invisalign is no different in this respect. Plaque can build up on the gum line if you’re not careful to brush or floss properly – especially after eating. Which is why you’re encouraged to clean your teeth before putting the Invisalign aligners back onto your teeth.

Which reminds me, I can now floss inbetween my teeth properly! This might not sound like much but just last week my teeth were crowded and I couldn’t get the floss to reach properly to clean the areas. To my mind, just to be able to reach around the back of some of the teeth shows there has been a vast improvement already.

That’s it for now. For my next appointment I will hopefully get a look on the software as to what my teeth should look like after I’ve completed the treatment, which I will keep you all informed about.

In the next update I’ll talk about the second trays and any progress I’m having.

On Monday afternoon, I went to the Liverpool Dental Spa to have my first set of Invisalign aligners fitted. As soon as I was welcomed into the practice I was really impressed with the way I was treated as the whole dental team made me feel at ease. Everyone was very friendly and helpful about any questions I had.

I remember feeling nervous as I walked into the practice, but the peaceful music and tranquil atmosphere of their reception area soon put me at ease. It wasn’t until I was called into the treatment room that I realised what I was about to do. Thankfully Marius McGovern, owner of the practice asked me if I was ready to go ahead with the treatment and explained everything to me in detail; that I was to have 21 sets of aligners on my top teeth and 16 on the bottom set, meaning that I should finish treatment around November.

I closed my eyes as the six ‘buttons’ or attachments were bonded onto my teeth, but the process wasn’t painful, despite my initial panic over thinking they would look really noticeable. I promise you, they’re really not that easy to see!

The idea behind attachments is that they provide grip on the teeth and aid in their rotation, so they move into the correct place. There must have been about 10 minutes where these were bonded on, though I didn’t feel anything during this process.

After the attachments were fitted, I had the aligners placed onto my teeth and while I didn’t feel anything at first, I was aware that they fitted snugly onto my teeth and the sensation felt a bit like wearing a gum shield.

One of the dental nurses then brought a mirror over to me so I could have a look at my teeth with the aligners on. The first thing I noticed was the attachments on my teeth – but they were the same colour as my teeth and on closer inspection and barely noticeable. I was shown how to clean and maintain the Invisalign aligners and was asked to practise taking them on and off so I could get used to the feeling. It took a few minutes – but I got there!

We had a joke about Invisalign being the best diet to go on as people tend to avoid snacks and hot drinks when they’re wearing them. This is because hot drinks can warp the aligners and if you snack, you are then required to take them out and brush your teeth/aligners to avoid the build-up of food which can lead to plaque. With regard to cleaning the Invisalign aligners, I was advised to just use a bit of toothpaste on a toothbrush and rinse them out using cold water.

I was also given two sets of trays to store them in to keep them safe when they’re not in my mouth. One of the trays is red and one is blue. The blue one is for during the course of treatment and the red one is for previous aligners. 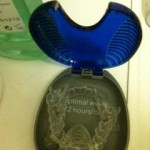 It was a strange feeling taking them off at first and I thought they might snap if I pulled too hard – but I was told just to pull them off, from the left, right and then finally the centre to remove them. I was also advised that my teeth would feel sore with these aligners in for the first couple of days, as the teeth adapt and get used to wearing them.

At first I thought ‘this is easy’ and wondered what all the fuss was about. For me, the pain didn’t kick in until I’d been wearing the aligners for at least 2-3 hours. The pain wasn’t excruciating, but it felt like a dull ache on my bottom set of teeth – more annoying than anything else. I took two paracetamol however and the pain soon subsided. It did hurt to remove the aligners to eat though and the pain was pretty sharp and somewhat agonising when taking them on and off. I just kept on thinking to myself that it can only get better!

I’m still finding it slightly difficult to adapt to these aligners. The pain taking them on and off is still there and it feels weird to taste the sensation of plastic in my mouth. I can’t get over how invisible they really are and so far no one has said anything about them or commented that they can see them.

The aligners are becoming more comfortable and don’t hurt as much to take on or off. They’re getting easier to remove too – maybe my teeth have started adapting to them? The taste of plastic is still there, but I’m getting used to it. I am noticing that I’m lisping slightly, but nothing too obvious.

That’s it so far! So what are my overall thoughts about my first few days of using Invisalign?

I’m really impressed by how virtually invisible they are and now my teeth are adjusting it feels pretty comfortable – and not like wearing a brace at all. I have to wear the first set for about 10-14 days before moving onto the next tray and I’m already feeling pretty excited to see the results. Of course there is a lot of commitment involved – 22 hours of wear a day is required, but so far it’s not been as difficult as I at first imagined.

In the next update I will talk more about my progress during this first set of trays and how I’m adapting to it – plus whether I have seen any results yet.